The Filmed in NC Fund supports the production of indie film and video projects by artists who are permanent residents of North Carolina, or who are full-time students at colleges or universities in North Carolina living full-time in NC. The Filmed in NC Fund is made possible through a partnership with the NC Film Office, and by a gift from Artless Media in conjunction with The Magnifying Glass. It is intended to support the development and production of new and ongoing projects with total budgets under $250,000. Projects are supported with funds ranging from $500 to $3,000 per project. 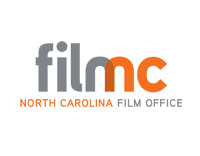