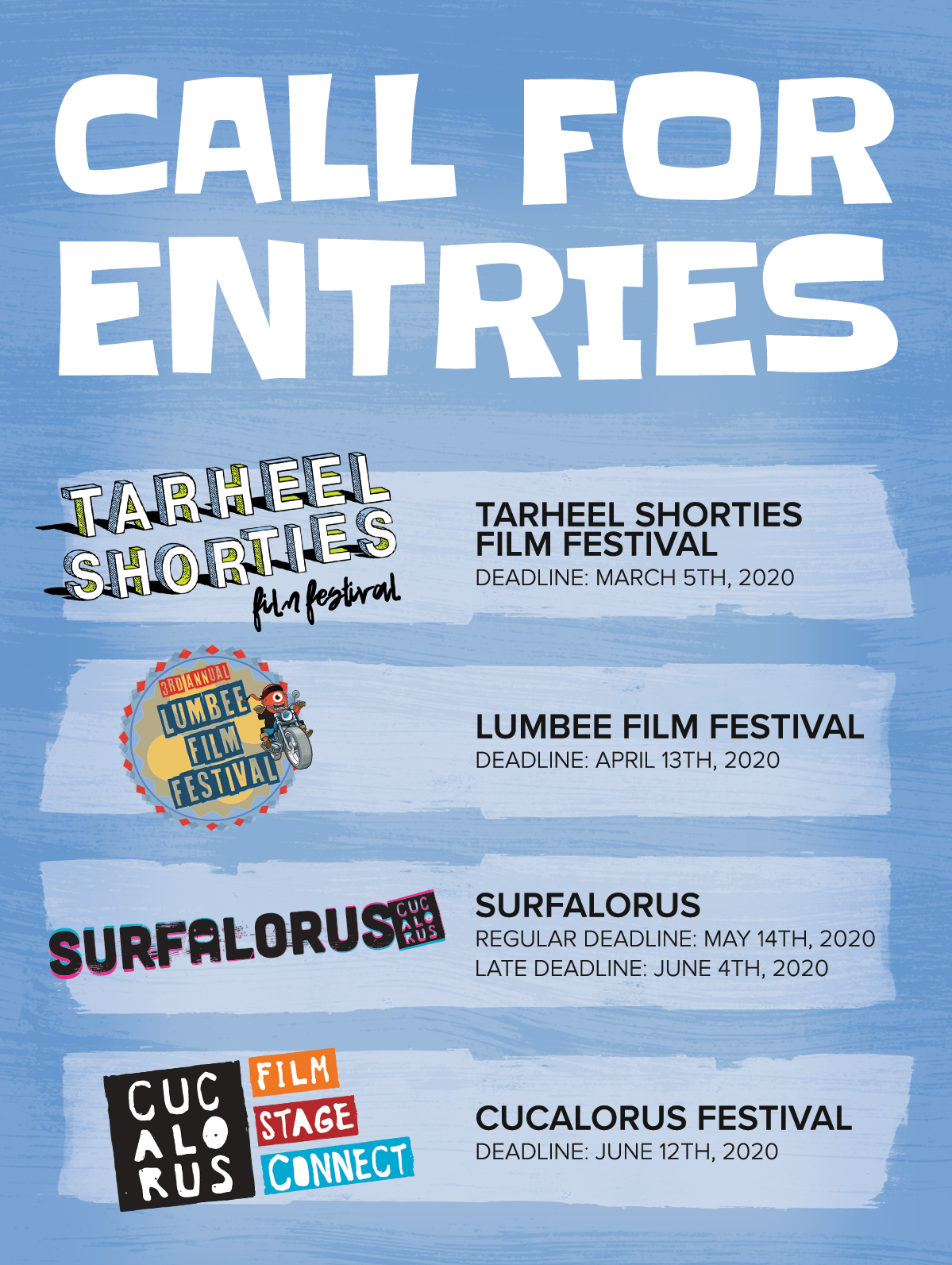 Call for entries now open for all four of our film festivals!
Send us your stuff!

We’re looking for wild and wonderful new films from sparkling and amazing humans! Cucalorus is accepting film submissions for all four of our film festivals. We kick off the season with Tarheel Shorties and the deadline is next Wednesday, March 5! If you made a film in NC over the past year, and you want to hang out with us in Wilson on May 8 – submit now. The next stop on our festival journey is the 3rd annual Lumbee Film Festival with a deadline of April 13. This new festival features films directed by American Indians and takes place in Pembroke, NC – home of the Lumbee Tribe. Things get rolling in September with the 9th annual Surfalorus Film Festival on the Outer Banks. The deadline to submit your super-stoked surf moooovie is June 4. And last but not least, the mothership Cucalorus Festival is seeking shorts, features, docs, and anything else you can squeeze into an mp4 file. The deadline to submit to Cucalorus Festival is June 12. So get your sound mix swirling and your gamma rays color-corrected because we want to see your stuff!

Who can submit, you ask? The ultimate submission would be a surf film made by an American Indian living in North Carolina. You could submit that wonderful creation to all four of our festivals!! Follow the links above to check out the Film Freeway guidelines for each fest. Tarheel only takes shorts by NC-makers while Lumbee is open to anyone who identifies as Indigenous or as an American Indian. Surfalorus takes only surf movies or docs about the ocean. And then the Cucalorus Festival is where it all comes together – anything goes. We want films by people from all over the world. We want films by people who have never made films before and people who have been making films forever. More than half of the films at the festival are directed by women, so we’re always extra eager to see films with women in leadership. And we’ve set some new goals for representing more filmmakers of color, so we’re waiving the entry fee for directors who identify as Black or Latinx. We will also continue to waive the fee for anyone living in the City of Wilmington or New Hanover County. Email me for more info on these sweet waiver deals, y’all!! dan@cucalorus.org

And don’t worry, applications will be released soon for Stage and Connect. We’re plotting and scheming for these two great festival programs with a renewed focus on Dance for Cucalorus Stage and a deep dive into the world of MUSHROOMS during Cucalorus Connect. Stay tuned for more info on these great programs and how to apply!

The Cucalorus Works-in-Progress (WiP) Lab supports unfinished social justice documentaries by Black filmmakers, and runs September 27 – October 2 on the Jengo’s Creative Campus in downtown Wilmington, NC. During this residency, filmmakers will explore project development and audience engagement strategies through workshops, consultations, and community screenings. The Works-in-Progress Lab was launched in 2008 through a partnership between Working Films and Cucalorus. Accepting applications through April 30th!

Are you serious about sending in an extra creative component?

Quite. But it’s just for good fun. Take your best crack at it. This is what keeps us going in the wee hours of the night.

Should I send my film to Cucalorus?

We encourage all filmmakers to send us their work. Anything goes! All films are screened by a dedicated team of screeners and programmers, made up of accomplished filmmakers, industry professionals, artists, the occasional preacher and one socialist realtor. We accept student films, funny films, erotic films, political films, experimental films, fancy big-money films, and backyard duct-tape films. Anything you can hide on the internet, send us the link. Even though we don’t give awards (see below), only one in every ten films get into the festival – so send us your best stuff and be nice to us because we have to watch a lot of movies and we love you.

Why doesn't Cucalorus give out awards?

Cucalorus says: competition sucks. It often takes hundreds of people to make a film, so why does one guy get the little statue? Ideas shouldn’t be owned by people, and people shouldn’t be singled out and ordered in a hierarchy. In order to create an open environment, where ideas are exchanged freely, Cucalorus avoids the competitive tension so prevalent at other fests. Laid back and low down rule the day in Cucaloria.

How can I get my film into Cucalorus?

Make a good film. Keep making them, and keep sending us links.

Cucalorus takes place in historic downtown Wilmington. Most festival events are within walking distance of each other, helping to ward off movie-butt syndrome. Wilmington is home to EUE Screen Gems studios, an unruly lot of indie filmmakers, and a thriving, progressive arts community.

When should I submit my film?

Cucalorus accepts submissions on a rolling basis. We use our submission base year round in scheduling Jengo’s screenings and for our festival line-up. Submit your film as soon as you’ve finished it. Download whatever entry form is on our site (even if it has old dates and stuff on it. We live at the beach, where everything’s cool all the time.)

Do you accept student films?

Can I submit a 'rough-cut'?

Absolutely. Send your film in and then send in newer versions as you make changes. This happens all the time, just make sure to note that it is a rough cut.

What does 'Works-In-Progress' entail?

The Works-in-Progress Lab (WiP) offers filmmakers at all stages of production an opportunity to showcase their films in a workshop-style setting. WiP focuses on strengthening community impact of documentaries about social justice with an emphasis on supporting the development of African American filmmakers. WiP supports filmmakers through developing engagement strategies through an immersive residency, taking place before and during the festival. Five filmmakers receive extensive community feedback during a week of screenings, workshops, and outreach. The 2016 program provided direct financial support through honorariums, travel stipends, lodging, airfare and rental fees. WiP includes community engagement events, public and private screenings, impact strategy sessions, and one-on-one consultations.

What if I have another question?

Not finding the answer you need? No problem. Contact Rachel Taylor, Programming Coordinator. Or visit our staff page for the full directory.