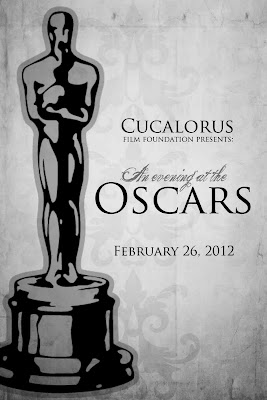 An Evening at the Oscars…

Join Cucalorus, your favorite film festival, as they put on their third annual Oscar Party fundraiser February 26th! We’ll be enjoying the Academy Awards in style on giant screens, with food and drinks, a Red Carpet paparazzi gauntlet, a curated Silent Auction, a cash prize Oscar Pool and other fun surprises.

Tickets are limited, and can be purchased online at www.cucalorus.org. Dress to the nines and walk the Red Carpet with Cucalorus at the best Oscar Party in town!

The 84th Academy Awards nominations will be announced live on Tuesday, January 24, 2012, at 5:30 a.m. PT in the Academy’s Samuel Goldwyn Theater. So far, three Cucalorus 17 selections that have made the short list!

For Best Documentary Feature we have “Semper Fi: Always Faithful” directed by Rachel Libert & Tony Hardmon. Then we have “Daisy Cutter” directed by Enrique Garcia & Ruben Salaza and “Ingrid Pitt: Beyond the Forest” directed by Kevin Sean Michaels for Best Animated Short.