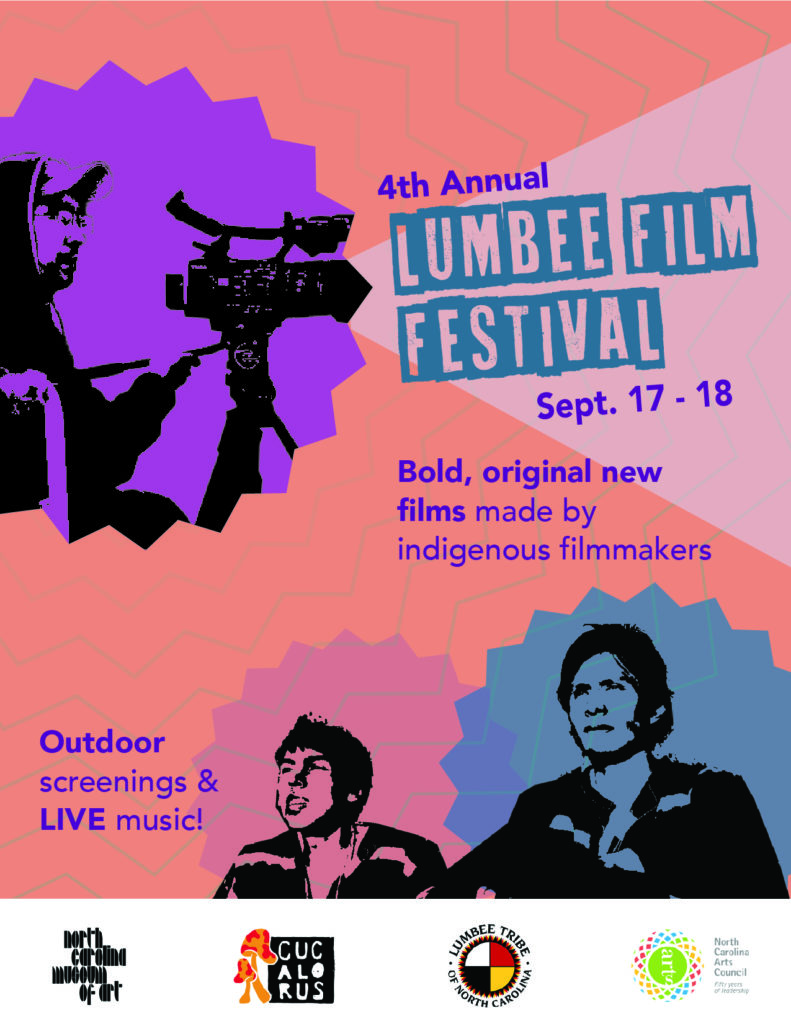 July 29, 2021 – The 4th annual Lumbee Film Festival returns to the big screen with eighteen new films directed by indigenous filmmakers screening over two days at the Thomas Entrepreneurship Hub on Main Street. This year’s festival is presented by the North Carolina Museum of Art and includes live music, film, food, and fellowship.

The festival opens on Friday, September 17 with an outdoor screening of RUMBLE: The Indians Who Rocked the World, an electrifying look at the Native American influence in popular music — despite attempts to ban, censor and erase Indian culture. The film reveals how early pioneers of the blues and jazz had Native American roots, and how artists like North Carolina’s own Link Wray helped to define its evolution and forever changed the trajectory of rock and roll.

Before the film, Robeson county native and Lumbee Tribe member Charly Lowry will perform a mixture of her well-known songs along with new works. Lowry appears in RUMBLE along with mentor Pura Fé and many other well known Lumbee musicians. Lowry first gained international recognition as a semi-finalist on American Idol in 2004 but has since built a following for her unique, energetic and captivating performances. She is also active as an advocate for Native rights and women’s rights.

According to the festival’s founding director Kim Pevia, “”Each year the Lumbee Film Festival gets better and better. I am so excited about this year’s line up of short and feature films. Some are traditional and some have us thinking out of the box.  Some are local and some are far away. Just like in real life. Something for everyone. Come join us. You will be glad you did.”

The festival is organized through a partnership between the Lumbee Tribe of North Carolina and the Cucalorus Film Foundation with the goal of showcasing films made by American Indians while raising awareness about the legacy of indigenous artists.The festival creates a platform for emerging Native artists, especially those working in the Southeastern United States.

Three shorts blocks will screen at the Thomas Entrepreneurship Hub on Saturday starting at 2pm with the “The Sun Shines, The Water Flows” shorts block which includes films by Lumbee youth like “Climate Change” made through the Unlocking Silent Histories project as well as films from the Wapikoni Mobile collective from Canada who use media to raise awareness about Indigenous cultures, issues and rights.

The “Roots Run Deep” shorts block starts at 3:30pm and includes the poetic and observational documentary Concrete 49 by LFF Alum Justin Deegan. The short is a subtle and effective examination of the lives of indigenous people living in New York City. The “All My Relations” shorts block brings together five dramatic works to close out the afternoon’s survey of short form indigenous cinema.

A special screening of The Trancscenders, a feature film by Montana Cypress (Miccosukee Tribe of Indians of Florida) will be screened immediately following an awards ceremony at 8pm on Saturday, September 18 at the Thomas Entrepreneurship Hub. The film follows the struggles of two brothers who find a remedy that promises to “transform their primitive behavior” as they transition from life in the city which differs greatly from their upbringing on the reservation.

For tickets, passes, and the full festival schedule visit https://www.cucalorus.org/lumbee-film-festival/. The Lumbee Film Festival is a partnership between the Lumbee Tribe of NC, Cucalorus Film Foundation, ARRAY, SouthArts and the NC Arts Council.