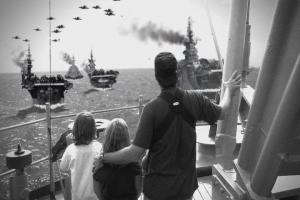 The Nashville/Midsouth Chapter of The National Academy of Television Arts and Sciences (NATAS) announced their nominations for the 26th Annual Midsouth Regional EMMY® Awards at a November 18th reception held at BMI’s Nashville headquarters.

Rob Hill of Common Sense Films, the Wilmington, North Carolina television and media company, received a nomination in the category of Best Editor/Program for the documentary, Battleship North Carolina: The Showboat Legacy.  Commented Common Sense Films partner and Executive Producer Richard Sirianni, “This is really great news that Rob gets the editing nomination. As an independent filmmaker you do it all, plus some.”

Battleship North Carolina: The Showboat Legacy had a May 29, 2011 broadcast premier on UNC-TV. This enlightening documentary explores the history behind this decorated Naval vessel and the monumental task of maintaining it as a National Historic Landmark. The past and present merge as this half-hour program highlights the USS North Carolina’s history and her legacy that continues today.

The Chicago/Midwest Chapter, the Mid-America Chapter based in St. Louis, judged more than 700 entries the Mid-Atlantic Chapter based in Philadelphia, and the New York Chapter resulting in nominations for 65 organizations.  Winners will be announced during a live awards ceremony to be telecast from the Schermerhorn Symphony Center in Nashville, Tennessee on March 17, 2012.

NATAS is a non-profit, professional organization dedicated to fostering excellence in television. The academy has 19 chapters with 15,000 members nationwide. The Nashville/Midsouth Region encompasses the states of North Carolina (except Asheville) and Tennessee, and northern Alabama.

To learn more about Battleship North Carolina: The Showboat Legacy you may visit www.showboatlegacy.com.