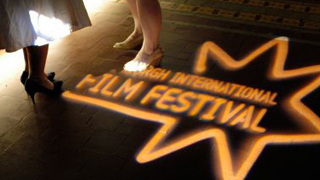 True evidence that the global film community is sometimes quite small, I sat next to New York-based filmmaker Jarred Alterman on my flight from Newark to Edinburgh. On my recent trip to the Maryland Film Festival, I was lucky enough to catch a screening of Jarred’s film Convento at the Maryland Institute College of Art. I took it as a good sign that I had a friendly fellow traveler to help kick off my trip to the 65th Edinburgh International Film Festival. Jarred’s film Convento is graceful documentary about an odd family of artists who live on an old monastery in Portugal. Keep an eye out for news about Convento at Cucalorus 17 – might make the final mix – but Who? Knows!

Something about dropping down in Scotland’s capital at 10am in the morning makes my heart ache. My love affair with Edinburgh began more than ten years ago when I worked in the print traffic department at the Edinburgh International Film Festival. In many ways, it was that time spent hustling prints from the Filmhouse on Lothian Road to the Cameo Picturehouse that drew me deeply into the world of film festivals. I already had a couple of years under my belt working with Cucalorus, but it was the combination of international exchange and Scottish hospitality that really locked me down. So my annual pilgrimage to Edinburgh becomes more and more of a homecoming as my friendships and memories there grow deeper.

Just like a lot of festivals around the world, the Edinburgh Film Festival is facing major budget challenges. So it’s no surprise that festival leaders were looking for change in 2011. With the departure of Artistic Director Hannah McGill last year, the festival apparently went looking for business skill over artistic experience in order to give new life to the festival’s budget. The result – still a work in progress – was a hot topic at the Filmhouse bar and in the Scottish media. Some friends of mine even circulated an open letter to the media, seeking signatures on a letter urging the festival to hire an artistic director to insure the continued integrity of the longest continually running film festival in the world.

I was more interested in watching films than chatting about the inner workings of the festival staff and leadership, so I settled into one of the big red velvet chairs at the Cameo to watch Dominic Allan’s CALVET –  a touching documentary about French artist Jean Marc Calvet and his journey to make peace with his past. Jean Luc was once a struggling drug addict and night life junkie who finds peace through painting. The film follows Calvet for several years as he recounts his wild and selfish downfall. The filmmaker gets deeply involved in Jean Luc’s personal life and clearly has an impact on the choices that lead him to confronting some of the loose ends of his life. CALVET is an epic tale – just as profoundly large and moving as Jean Luc’s canvases.

The opening night film “The Guard” starring Brendan Gleeson and Don Cheadle was well-attended but certainly not sold out. None of the stars from the film were in attendance either – both of these facts were pointed out repeatedly by the Scottish media – who seemed intent on criticising the work of new director James Mulligan. I was a little more forgiving – the red carpet spectacle is not one of my favorite things about the film industry and it was actually quite nice to see directors, editors and composers getting a little bit more of the spotlight. No red carpet is a good thing in my mind. On the other hand, the opening night film itself was a bit too campy for my taste. Inconsistent edits and some petty, unnecessary racism added to the unfortunate result – a film with serious issues that never could figure out what it wanted to be – which might have been the perfect metaphor for this year’s festival.

The UK jailhouse drama Ghosted was another mediocre entry – a well constructed drama about the intensely political maneuverings inside a scottish prison. Good enough, but nothing special.

One of the best films on the schedule had already received its fair share of praise – “Our Day Will Come” (starring Vincent Cassel) was just the kind of disorienting and disturbing mind scramble that one expects from a well programmed festival. Terrific performances and a singular vision from director Romain Gavras (well known for his music videos – like M.I.A.’s ‘Born Free’) resulted in a nihilistic joy ride full of bizarre and unexplainable situations.

One of the reasons I travel to the Golden City every year is to see my friend Matt Hulse. Matt is undeniably one of the more inventive and challenging artists in Edinburgh or anywhere for that matter. Matt’s films, like Polskie Buty CFF ’03 and Follow the Master CFF ’09, have screened at Cucalorus for nearly a decade now. At Cucalorus last year, Matt brought a grab bag of odd offerings, including the Audible Picture Show and the world premier of his short A Pilgrimage. Most importantly though, Matt has been busy finishing principal photography on his feature project Dummy Jim – which we hope will be ready for some kind of unveiling in the not too distant future (wink, wink – get to work Matty!). Matt’s dog Tippy (the star of Follow the Master) looks like a slightly larger version of the new Jengo’s pup Izzie. Matt and I are scheming and planning for a project based on his childhood band the Hippies with the vague hope to have bands cover Hippies songs for a new documentary to be partially made during Cucalorus. Again, might happen, but Who? Knows!

Matt and I took a stroll through the meadows and even visited the historic Warrender Swim Centre for a quick swim one afternoon. I attempted to drag Matty to a couple of festival screenings – especially the hilarious Aussie doc “Shut Up Little Man! An Audio Misadventure.” One of many strong docs in the EIFF lineup, Matthew Bates documentary is a careful and at times subtly sophisticated recap of the cult phenomenon started by roommates Eddie Guerriero and Mitch Deprey when they started to record their relentlessly loud, arguing neighbors in San Francisco.

The majority of my trip was filled with short strolls down Lothian Road to catch screenings at the Cameo and the Filmhouse – with a few naps in the Meadows to keep my eyes well rested in between. I saw a host of strong narrative international features — Bill Nighy perfectly cast in the political drama Page Eight, Ewan McGregor looking good falling in love in David McKenzie’s Perfect Sense, Agnieszka Lukasiak’s (Forgotten CFF ’07) perilous refugee drama Between 2 Fires, and the Icelandic coming of age tale Jitters. A host of guest curators brought older films to the festival lineup – but without the coherent context of a retrospective or some thematic program – these selections just seemed to jam up the festival schedule and create less room for deserving contemporary artists.

Of course, the films are usually just an excuse to curl up at the Cameo with a tastie beverage and to visit my Edinburgh friends Loren Slater, Angie Jennings, David Drummond, Lucy Brown, Matt Hulse, and Tippy. Right now we’re busy making future festival travel plans at Jengo’s. We’re dialing in our google maps to downtown Toronto for a wee journey in early September.