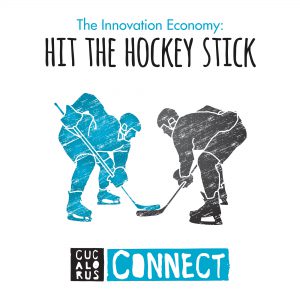 Wilmington’s regional economic identity should be unwaveringly aligned to The Innovation Economy. Indeed, there is a strong data-driven case to spend virtually 100 percent of our finite economic development resources – time, talent and treasure – on traded-sector, innovation economy companies producing goods and/or services. From startups to breakout startups that hit the “hockey stick” in terms of rapid net new employment numbers, and then very large, decades-old innovation companies. Think about Microsoft, SAS, Apple, Corning and GE. Despite their age and size, a culture of innovation is present. This in turn leads to continuous product and service enhancements.

For every one traded sector innovation job created, an additional FIVE jobs are created. These span traded and non-traded sectors. They could all be non-innovation jobs too, providing employment to a wide range of skills and wage levels.

This year, Cucalorus Connect’s four track format revolves around the Connected Digital Economy. Each track focuses on traded, innovation sectors and companies that produce advanced goods and services in the digital industrial-enterprise-consumer sectors.

These areas should be the focus of our political and economic development investment. Want to create new and better-paying jobs for the undereducated and lesser-skilled workers in the region? Then grow your traded sector, digital innovation economy! Do this, and the multiplier effect will blossom and help everybody!

Imagine if Wilmington became a model for the nation in addressing issues like those exposed in the last election cycle. A great divergence in the nation’s economy, with some regions winning (innovation-led econ. Dev.), and others engaged in a race to the bottom (traditional manufacturing-led econ. Dev.).

Wilmington has for the past 15 years proven to be a growing, innovation-led regional economy. As the 120th or so largest of the 350 metro economies tracked by Census (MSAs – metro statistical areas), we could be looked at as “Goldilocks.” Since we’re neither too big nor too small, we’re just right! Connect 2017 provides a formula for taking stock of who we are and how we could continue to grow wisely!