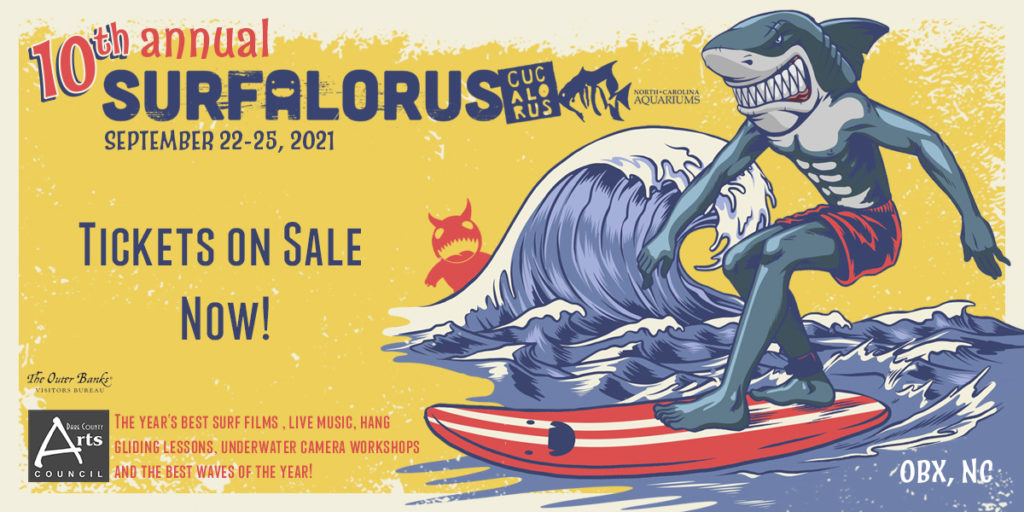 July 29, 2021 – Celebrate ten years of the Surfalorus Film Festival, presented by North Carolina Aquariums, during the final weekend of the Eastern Surf Championships, Sept. 22-25, 2021. Surfalorus brings a stacked lineup of films including the trailblazing story of the first female pro surfers as well as a very special sneak preview of an upcoming doc about the real story behind the Endless Summer. Locations for this year’s event include Jennette’s Pier, NC Aquarium at Roanoke Island, Dare County Arts Council, Jockey’s Ridge State Park and Jack Brown’s Beer and Burger Joint.

The festival kicks off on Wednesday, Sept. 22 with “Girls Can’t Surf,” a new documentary that tells the story of the trailblazing female pro surfers of the 1980s. “Girls Can’t Surf” follows the journey of a band of renegade surfers who took on the male-dominated professional surfing world to achieve equality and change the sport forever. Featuring surfing greats Jodie Cooper, Frieda Zamba, Pauline Menczer, Lisa Andersen, Pam Burridge, Wendy Botha, Layne Beachley and more, “Girls Can’t Surf” is a wild ride of clashing personalities, sexism, adventure and heartbreak, with each woman fighting against the odds to make their dreams of competing a reality. The opening night film takes place at Jennette’s Pier starting at 7 p.m.

N.C.’s own Dexter Romweber will perform for the opening night party at Jack Brown’s Beer and Burger Joint in Kill Devil Hills. A seminal figure of the American music underground, Romweber pioneered the template for the stripped-to-the-essentials guitar/drums duo format that influenced the White Stripes, The Black Keys and Neko Case.

Thursday, Sept. 23, visiting filmmakers and passholders can take a hang-gliding lesson or chill on the beach and watch the Eastern Surf Championships. That night, the “Corolla Shorts Block” hits the screen with a rad collection of global and local fare, including OBX filmmaker Logan Marshall’s newest shortie “Out Front: Outer Banks.” Surfalorus alumna Jordyn Romero returns to the festival with her newest short, “We are Like Waves,” about a young woman named Sanu who struggles to become a female surfer in Sri Lanka. Thursday night’s screening takes place at Jennette’s Pier and starts at 7 p.m.

Roll over to the North Carolina Aquarium at Roanoke Island on Friday, Sept. 24, for an exclusive underwater camera workshop for filmmakers and passholders. Stick around that evening for a very special sneak preview of Richard Yelland’s documentary “The Birth of the Endless Summer” followed by a reception with live music. “The Birth of the Endless Summer” follows Californian surf pioneer Dick Metz as he vagabonds the globe from 1958-1961. Metz’s train-jumping, steamship-hopping tour, in the vein of On the Road and The Motorcycle Diaries, led to Metz’s discovery of “the perfect wave” at Cape St. Francis, South Africa. Dick’s travels not only inspired his friend, Bruce Brown, but also paved the way for The Endless Summer to become a reality. “The Birth of The Endless Summer” follows the 90-year-old Metz back to South Africa to retrace the steps of his original journey.

Saturday night the festival closes with an awards ceremony at the Dare County Arts Council followed by the “Buxton Shorts Block.” The seven short films take us from Ireland to Japan and from Sri Lanka all the way back to Wrightsville Beach in an uplifting group of outstanding surf stories. One of the highlights of the screening, “Charlie Surfer” follows a young boy with Asperger’s who loves surfing and dancing as he enjoys the highs and lows of a summer surf camp.

Tickets are on sale now at surfalorus.com for all screenings. An all-access pass for only $25 can also be purchased. The 10th annual Surfalorus Film Festival is presented by North Carolina Aquariums and is a co-presentation of the Cucalorus Film Foundation and the Dare County Arts Council with support from the Outer Banks Visitors Bureau.

Contact dan@cucalorus.org for more information. Graphics and hi-res photos for featured films are available on request.