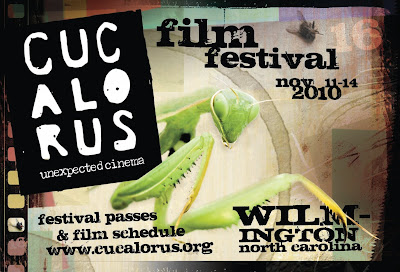 Cucalorus returns to the historic port city for its annual cinematic celebration this November 11-14th . Early selections have been announced, including Gaspar Noe’s cinematic wonder Enter the Void, Sundance World Cinema documentary winner The Red Chapel by Mads Brügger, and a healthy list of additional independent and international titles. The final film lineup will be announced in the first week of October.

Organizers are planning for a festival schedule of 120 films from around the world ranging from searing documentaries to groundbreaking features, building on the festival’s mission to present new, challenging works from both established and emerging artists. The festival’s hub will return to the newly restored Thalian Hall Center for the Performing Arts. Other core venues include City Stage Theater and Jengo’s Playhouse, bringing the festival back to its downtown roots and making the festival easy to navigate for audience and visiting filmmakers alike.

Cucalorus Film Festival programmers and Director Dan Brawley released a list of Early Selections in late August. According to Brawley, “We’re more excited than ever about the films and filmmakers who will be bringing their work to Cucalorus this year. Without a doubt, this year’s festival schedule will be the strongest in our history, with a sampling of the most significant works from the festival circuit and a handful of discoveries that will blow you away. I really think that Cucalorus is making a statement – solidifying its position as an important gathering of the most exciting artists working in film.”

The early selection list includes a broad collection of international films, festival favorites and local works chosen from over 1,100 entries received so far this year. According to programming coordinator Lexi Lefkowitz, Cucalorus received a record-breaking number of entries with films coming from 39 different countries. Early selections include films from Germany, Estonia, Scotland, Canada, Austria, Guatemala, Poland, and from cities all over the United States.

French filmmaker Gaspar Noe’s epic drug-induced fantasy Enter the Void was added to the lineup recently, joining SXSW hit Mars and the charming British comedy Skeletons on a list of a dozen narrative features slated to screen at the fest so far. A healthy list of NC filmmakers will have short films screening at the festival, including UNCW Film Studies professor Dave Monahan (Things Grow), NC School of the Arts alum Ryan Jeffrey Davis (Pink Triangle) and veteran scriptician Richard Leder (Regular Kids). An eclectic selection of international artists and festival circuit all-stars round out the early shorts with films from Bill Plympton, John Dilworth, Kelly Sears, Joost Van, William Noland, and Sara Colangelo. Early shorts include Successful Alcoholics, Adventures of a Distant Mind, Peter in Radioland, The S From Hell, Massacrator, and Memory Leak. Final plans for a block of Scottish shorts are being finalized now – building on the festival’s longstanding relationship with the creative scene in Scotland and the Edinburgh Film Festival.

Narrative Features – highlights:
Enter the Void (France) – Gaspar Noé:
One of the most anticipated cinematic events of the year, Gaspar Noé’s Enter the Void is a visionary cinematic thrill ride that’s riveted audiences at the world’s most significant film festivals. At Cannes, Manohla Dargis of The New York Times called it “an exceptional work… What largely distinguishes it, beyond the stunning cinematography, is that this is the work of an artist who’s trying to show us something we haven’t seen before…Mr. Noé, in other words, gets into your body…”

The Temptation of St. Tony (Estonia) – Veiko Õunpuu:
A surreal and bone chilling tragedy about the agony and decline of one middle level manager, this Sundance sleeper is a dark and moving meditation on the cold and dehumanizing world of declining economies in an overly technical world.

Documentary Features – highlights:
The Erectionman (Austria) – Michael Schaap:
Find out how one little pill changed the course of sexual evolution and bankrupted one funny filmmaker from Austria.

Roll Out, Cowboy (USA) – Elizabeth Lawrence:
Chris “Sandman” Sand is a rappin’ cowboy from Dunn Center, North Dakota (population: 120 and shrinking). He drives a semi, plays the guitar and raps. He looks like Woody Guthrie but sings like Dr. Dre. Roll Out, Cowboy follows the 39-year-old country/hip-hop musician as he tours the American West during the 2008 Presidential election. Small town America isn’t as conservative as we think.

A Film Unfinished (Germany, Israel) – Yael Heronski:
Yael Hersonski’s powerful documentary achieves a remarkable feat through its penetrating look at another film—the now-infamous Nazi-produced film about the Warsaw Ghetto. Discovered after the war, the unfinished work, with no soundtrack, quickly became a resource for historians seeking an authentic record, despite its elaborate propagandistic construction.

The other side of Cucalorus
From Dance-a-lorus to the Blue Velvet tour, the Cucalorus Film Festival presents a series of non-traditional events that cross artistic boundaries and challenge our understanding of cinema. A signature event for the festival, Dance-a-lorus (a collaboration with local choreographers collective the Dance Cooperative) will once again open the festival on Thursday night with a live-stage event blurring the boundaries between dance and film. Building on several years of research and practice, British born filmmaker and teacher Ben Fancy conducts the entertaining and enlightening tour of locations for David Lynch’s American indie classic Blue Velvet. The festival has added a couple of tours this year, but reserve early to nab one of the coveted spots on this beguiling journey.

In conjunction with his Work-in-Progress screening for the narrative Dummy Jim, Scottish filmmaker Matt Hulse will host a performance of his “Audible Picture Show” a touring collection of audio works made for the cinema. Italian radio artist Stefano Giannotti and Wilmington-based noise master Grant Stewart have been commissioned to create new sound pieces for the Cucalorus edition of “Audible Picture Show.”

The festivals annual kickoff party at the Soapbox will include a variety show-style performance from many of the multi-disciplinary artists participating in this year’s festival. Italian radio artist Stefano Giannotti, Charleston-based spoken word artist Omari Fox of New Danger, accordionista-cum-filmmaker Josephine Decker and a host of the festival’s creative cadre will perform.

One of the buzzwords at Cucalorus this year is sustainability. Cucalorus development and marketing director Courtney Young reports that Cucalorus has renewed its focus on creating a sustainable model for celebrating film. Festival transportation will be totally electric – with attendees being zipped around the downtown festival loop on golf carts. The festival will also forgo printing tee shirts, instead there will be a print your own tee shirt station (bring us your favorite tee or jacket or bag and we’ll screenprint some loving Cucalorus 16 graphics on them!) at the festival’s main box office and filmmaker’s lounge, which will be located at an undisclosed Front Street location.

Passes and Tickets
Passes for the festival went on sale August 20. Tickets for the festival will be available when the final schedule is released in October through the festivals website and etix. Pass quantities are limited and usually sell out about two weeks before the festival. Buy them online at https://www.cucalorus.org/passes or call the Cucalorus staff who will be happy to help you over the phone (910) 343-5995. The festival has added a new, more affordable pass level this year called the Jibasorus, which includes five (5) tickets to screenings of your choice. The festival has also established new guidelines for existing passes, offering multiple tickets to individual screenings for some pass levels.

Jibasorus Pass ($40): 5 individual tickets of your choosing; limit four (4) per screening. The best way to sample the festivals lineup, a great weekend of fun films and parties.

Screening Pass ($75): 10 individual tickets of your choosing; limit (4) per screening. With over 100 films priced at $10 or more per film you’re talking major savings.

Festival Pass ($150): 15 individual tickets of your choosing; lmit four (4) per screening. Bonus, one ticket to the Midnite Brunch at the Dixie Grill (this year set to the dulcet tones of Raleigh-based band Kennebec) and access to the Filmmaker’s Lounge.

Pegasorus Pass ($300): Totally VIP, no tickets required. Walk to the door, we’ll scan your pass, and you’ll saunter right into prime, and reserved, seating. All the movies, all the parties, all the VIP seating. Plus, enjoy relaxing in the Filmmaker’s Lounge and connecting with film professionals from around the country and the globe. The package saves you money at every turn and puts you in direct contact with all of the filmmakers, festival sponsors, and film professionals for optimal film viewing and networking.
Cucalorus is plugged in. Stay in the loop with Twitter updates or become a fan on Facebook. Get further prognostications and pontifications at our blog at www.cucalorusfilmfestival.blogspot.com.

Go to www.cucalorus.org for ticket packages, passes, and the complete list of early release films including pictures and summaries. Press passes available now.

The Cucalorus Film Festival is funded in part by a grant from the North Carolina Arts Council and with funding from the City of Wilmington.